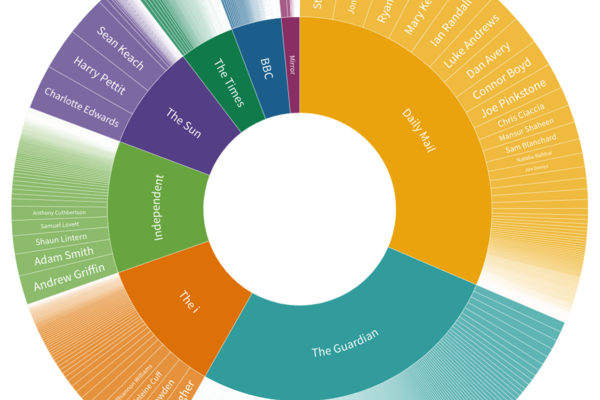 Across eight UK mainstream media online publications, covering the big stories in the world of science between 11th October 2020 and 10th October 2021 such as the Covid vaccine roll-out took over 3,500 different writers. According to the ABSW’s analysis, the websites of BBC News, Daily Mail, The Guardian, The i, The Independent, The Mirror, The Sun, and The Times published over 32,000 science articles. The subjects covered spanned everything from COP26 to NASA’s Perseverance rover landing on Mars.

This new data, shown below, is part of an ongoing project by the ABSW to understand how prevalent science is in the UK mainstream media, and to understand the people writing about science. We will discuss these figures and dive deeper into the data behind them, at ‘The State of Science Writing’ on Tuesday 22nd February at 6pm. Sign up here to join us!

This interactive diagram shows the numbers of articles contributed to by each of the 3,620 writers. The bigger the slice, the more articles contributed to. The Daily Mail and The Guardian had the largest numbers of science articles over the time period. This diagram shows how the Daily Mail favoured using regular contributors. By contrast, The Guardian appears to prefer using a large number of freelance writers in addition to a smaller number of regular contributors.

The work follows on from previous studies by Cardiff University in 2009, and by ABSW project student Ben Nealon over 2019 and 2020. The project seeks to monitor whether the number of science writers is increasing or decreasing over time. It also aims to give ABSW members in the UK mainstream media and beyond an understanding of the different publications’ hiring practices and outputs. It enables the ABSW to reach out to those who are writing about science regularly and are not yet members, and to provide helpful and relevant support and content.

Andy Extance, ABSW chair and freelance science writer, used commercial apps to scrape data from the websites of BBC News, Daily Mail, The Guardian, The i, Independent, Mirror, The Sun, and The Times, over the period. This data included article titles, author names, and time of publication for all stories classed as science, technology, health or environment by the publications. Rebecca Landon, data analyst and MSc Science Communication student, cleaned and analysed the data.

Over 50% of the science articles were written or contributed to by just 55 individuals. The most prolific writer, Stacy Liberatore at the Daily Mail, contributed to almost 900 science articles over the year. The data reveals possible differences in hiring practices of the publications and tells us how the numbers of science writers in UK mainstream media are changing over time.

There are some limitations to the data, however for the purposes of overviews and trends these aren’t a problem. Firstly, publications themselves may vary in what they define as science writing. Ed Yong, in an article for The Atlantic wrote, ‘Science touches on everything, and everything touches on science’. However, some publications’ feeds may have been more liberal with their definition of science than others, including Emma Bunton’s wedding under ‘environment’, for example. This is something the ABSW hopes to explore further in future work.

Secondly, we excluded several outlets from this analysis. We excluded the Daily Express and the Daily Telegraph from this years’ data as there were periods within the year when the data streams appeared to stop working. Therefore, we can’t be certain that this didn’t happen in a less noticeable way for other publications. We also excluded ITV, and Channel 4, because their websites don’t publish text news stories with author names. We excluded Sky because the content of its feed had too great a non-science content. Finally, we excluded the Financial Times because we couldn’t get the scraping apps to extract author names, likely due to how its paywall works.

The ABSW hopes to expand this work further in 2022. One possible dimension is delving further into the topics covered, and by expanding the number of publications included. We plan analyse data from the first quarter of 2022 as a first step.